How to read a candlestick chart 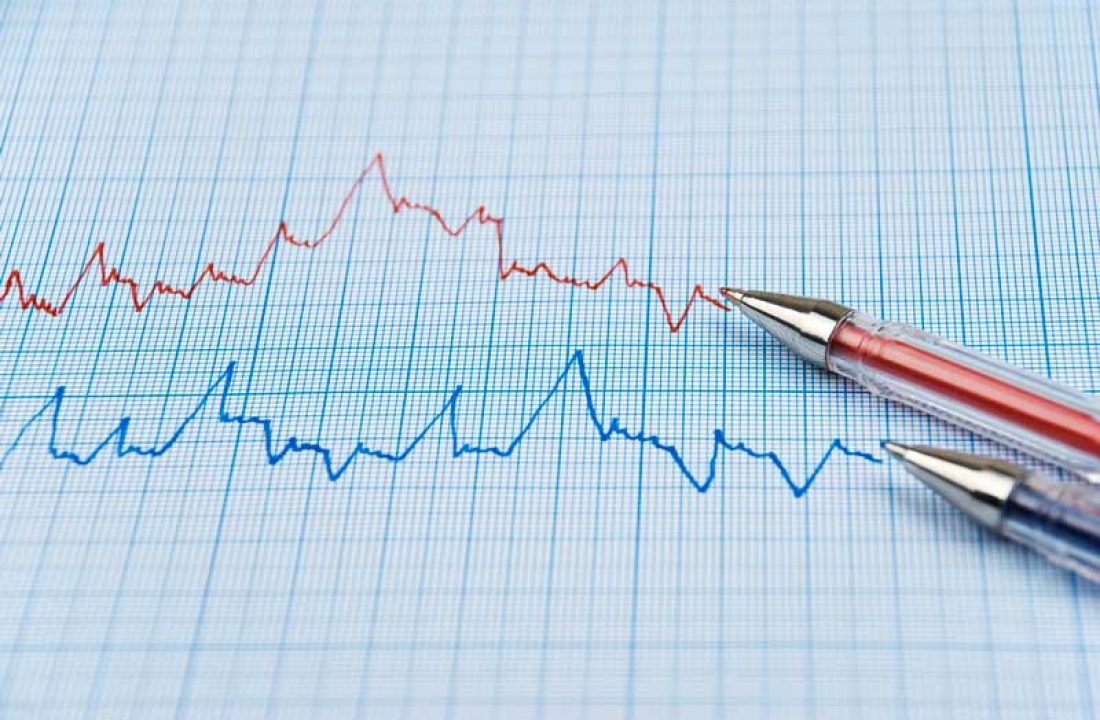 How to read a candlestick chart

Graphical analysis is a big area of trading. Some swear by it! There are different types of graphical market representations: simple line, zone, bars, candlestick or "Japanese" charts. This last visualisation is widely used by traders because it allows to draw several pieces of information at the mere sight of the graph and potentially predict future prices.

Candlesticks, also called candles, were created in Japan in the seventeenth century to represent the price of rice. This is the oldest form of graphical analysis.

Here are the different graphical representations. 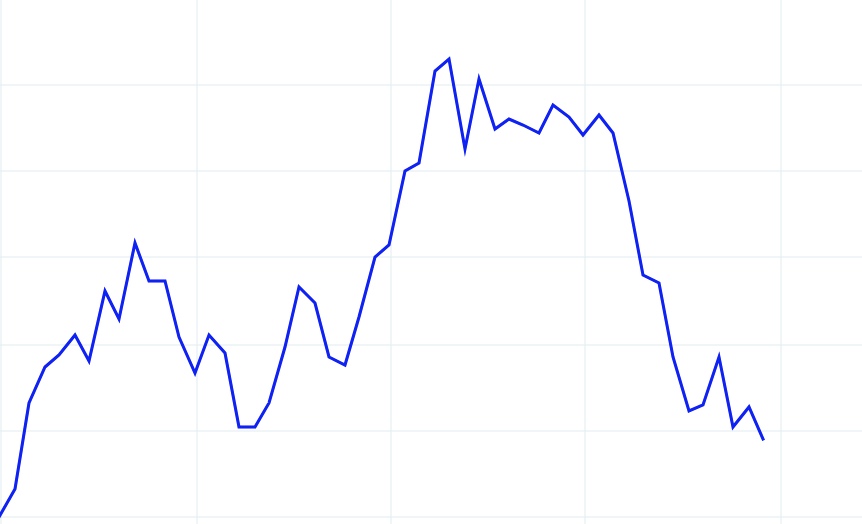 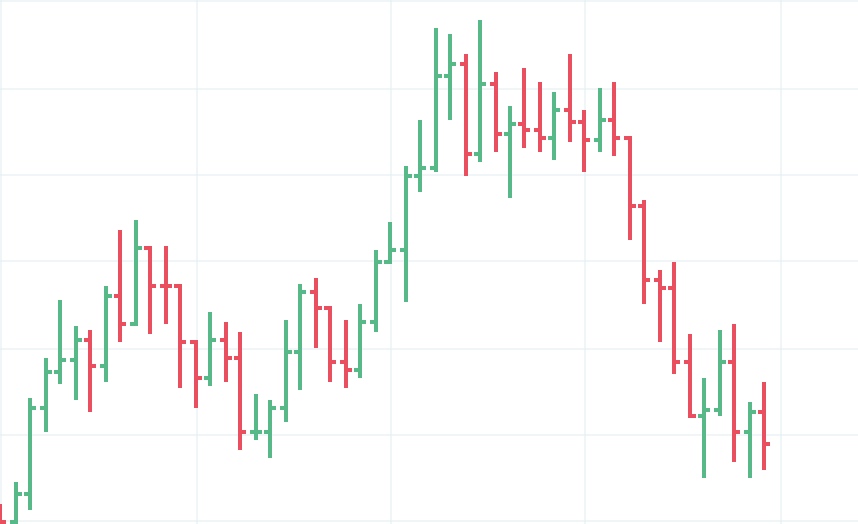 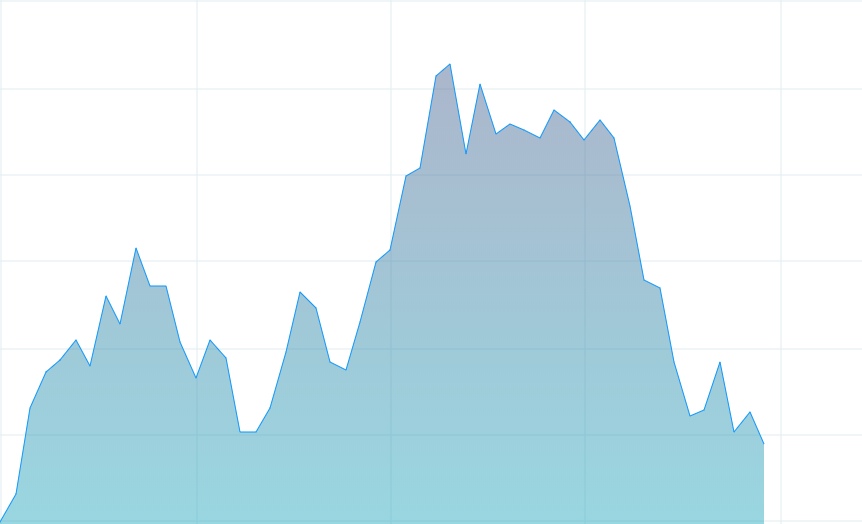 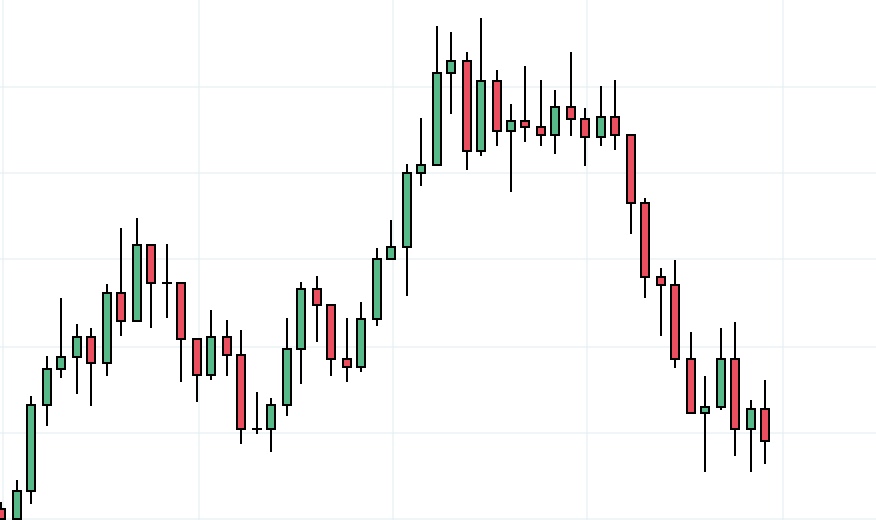 The basic elements of the candlestick chart

A candlestick gives us four price levels at a single glance: high, low, open and close. Between open and close, the candlestick’s “body” indicates market tendencies during this period: a bullish candlestick is conventionally green (close above the open) and a drop candlestick is red (close below the open). With a simple "drawing" we have access to five market elements. A candlestick represents a trading period: if the graph is daily, the candle represents a day. We also notice upper and lower "wicks", these vertical lines that represent the difference between the extreme points and the open or close. 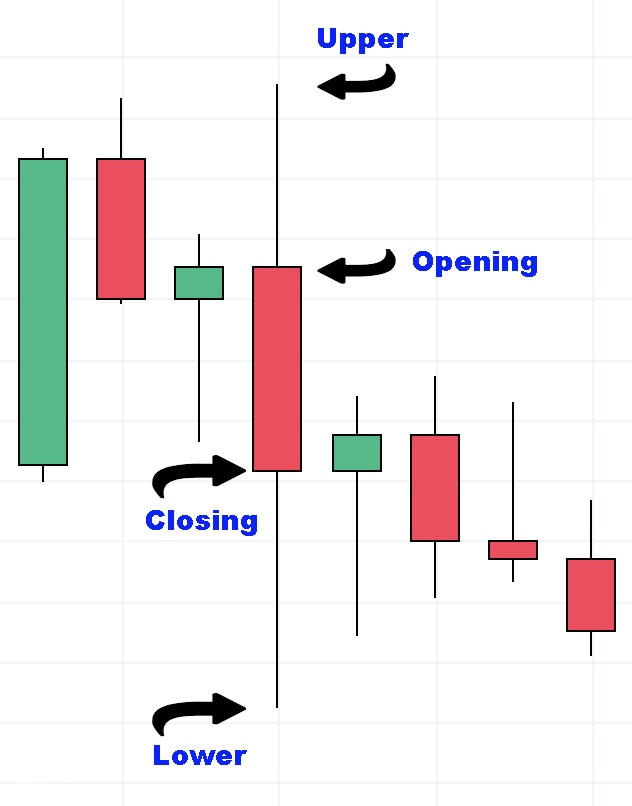 The basic elements of the candlestick chart

The purpose of candlesticks does not end there. In fact, their strength is to be able to detect situations or configurations in order to signal future movements, such as trend reversals or accelerations. There are many configurations that bear names like the hammer, the gravestone, tails, wicks and shadows, etc. Each figure can be interpreted in a way that predicts future events.

As usual with trading and graphical analysis, there is no certainty and we must interpret these "signals" with caution. On the other hand, these configurations depend on the time unit of the graph. Thus, a figure on a daily chart will no longer be relevant on an hourly chart. We find this in all technical indicators.

The engulfing candle, which signals a reversal (here bearish):

Let's see it in action here: 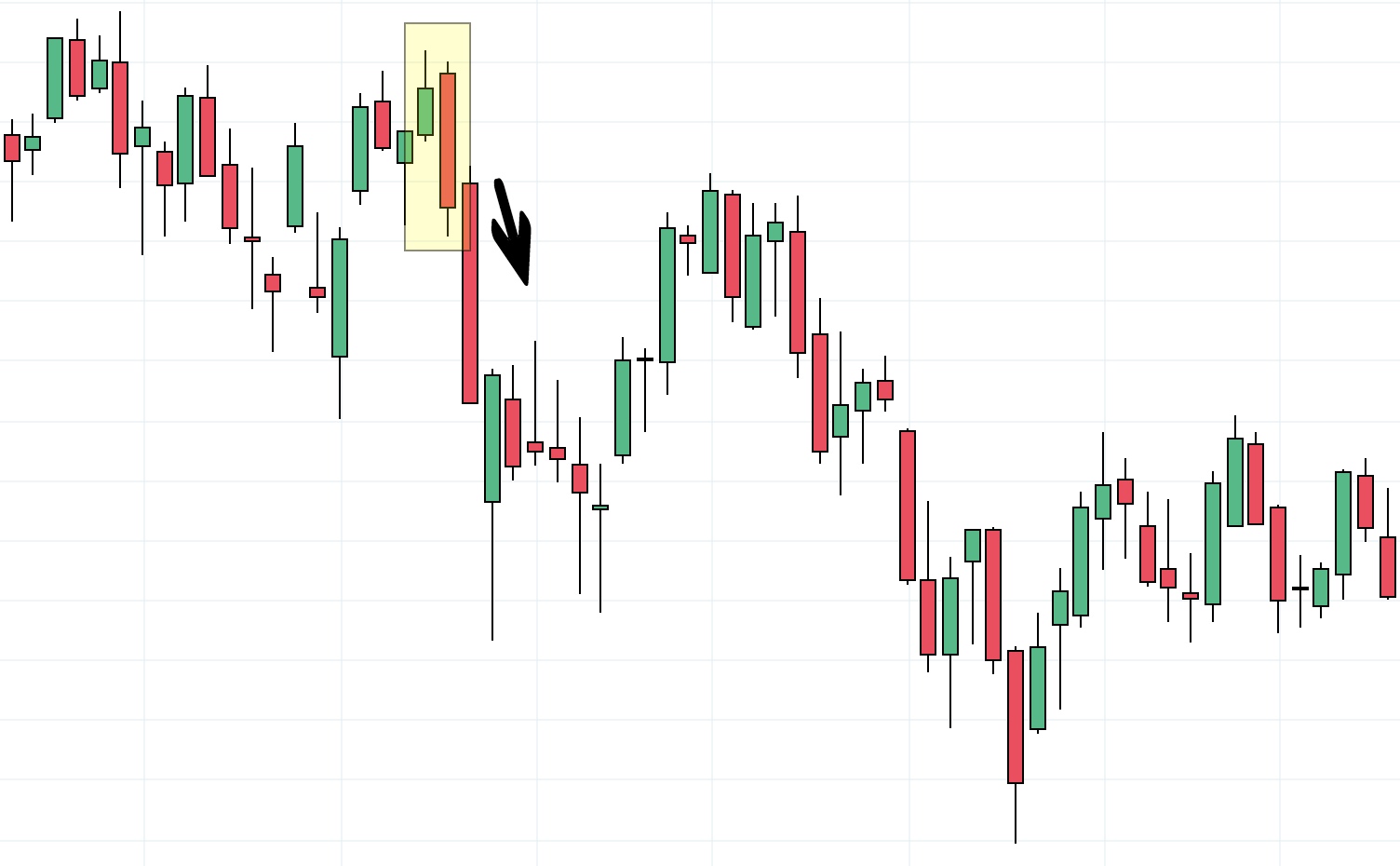 The engulfing candle in action

The Doji, characterised by the absence of body (same level of open and close), is very hard to interpret. It can signal a pause or a reversal of trend. This is what a Doji looks like here in the middle:

This is what a Doji looks like here in the middle: 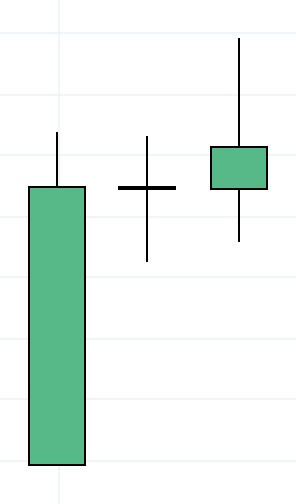 Here are two dojis in a price evolution: 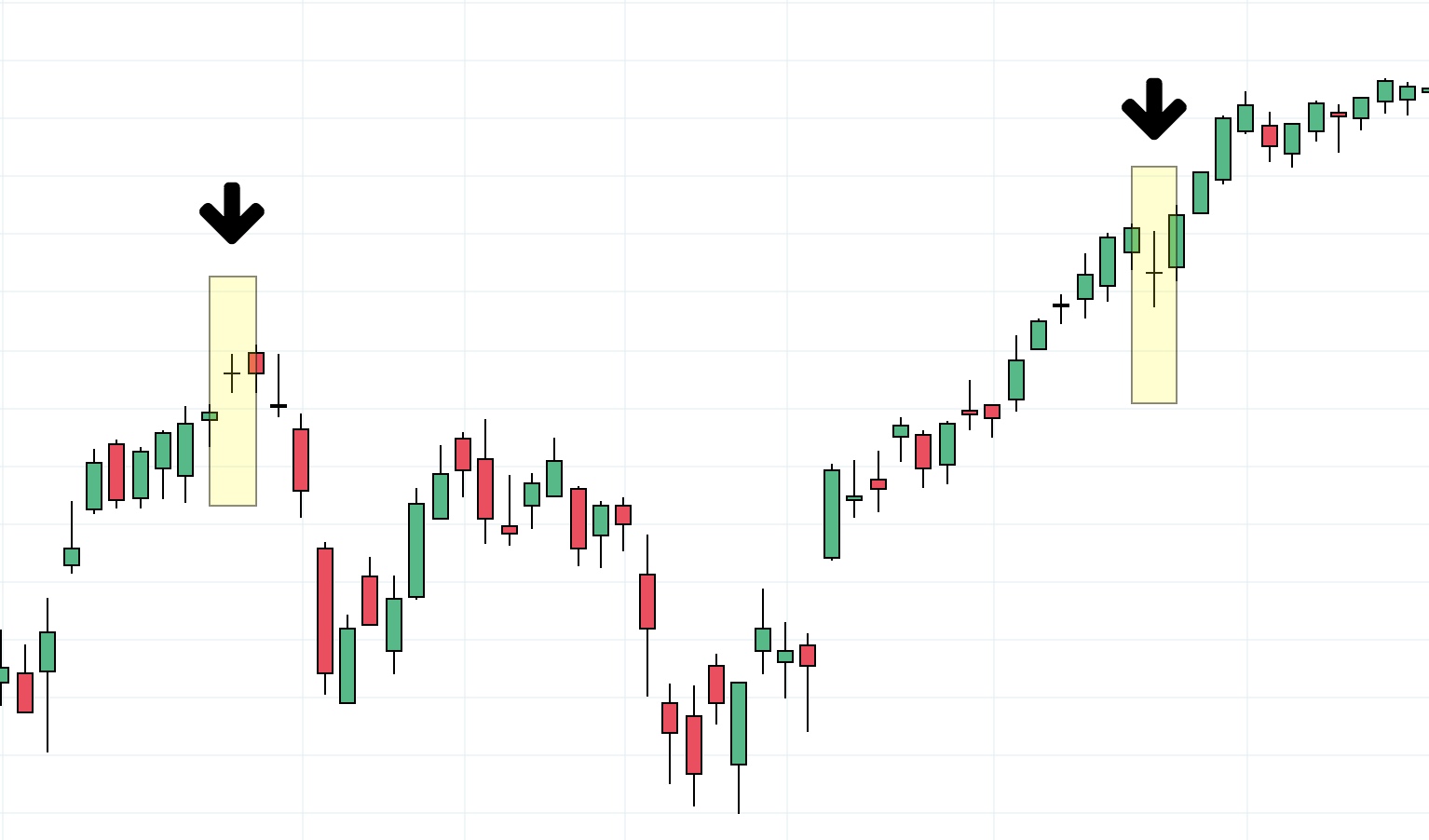 The candlestick’s body and shadows can indicate the volatility of the market. Shadows give us the highest and lowest of the period, an indication of extreme price fluctuations. Meanwhile, the body shows the balance of power between sellers and buyers: a small body (or non-existent body in the case of a doji) is a sign of fierce battle between the bulls and the bears. On the other hand, a clear body in one precise direction gives the victory to one of the two camps.

It is always easy to analyse candlesticks in hindsight and to find figures that announce the movements that follow. However, false signals are numerous. In the heat of the moment it is very difficult to act and trade candlesticks successfully in the long run. But each market is different, and this should not be overlooked. The interpretation of candlesticks may be different depending on whether one is in the stock market, currencies, commodities, etc. Finally, like any graphical analysis, the period used will determine different candlestick patterns and contrary signals sometimes.

Why does my broker require a photocopy of my credit card? When a trader wants to register on an online trading platform, some formalities are imposed. It is a question of respect towards the regulation set up by the financial authorities in order to regulate fraud and to control and protect amateur or professional traders.
What is money management? Mastering trading and succeeding in the long run depends on various factors such as strategies, more or less advanced techniques, a trader’s own experience and approach on stock markets, personal qualities, etc.