Joe Biden victory: which consequences for the markets? 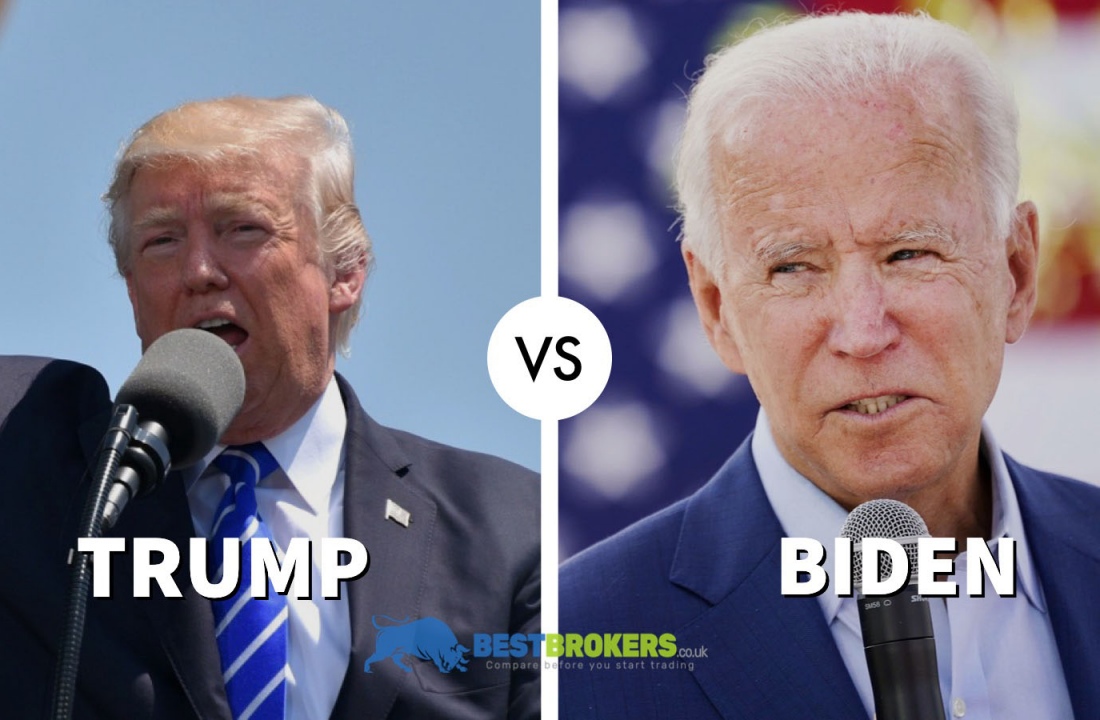 Joe Biden victory: which consequences for the markets?

The US elections are taking place in a couple of weeks and both candidates have polar opposite policies. Investors and traders are therefore wondering what the impact in the markets will be if one candidate or the other wins.

With the US presidential and legislative elections only weeks away, market volatility is high and investors are racking their brains as to what polls and policy proposals could mean for markets. There are many to consider: healthcare, trade, energy-related stocks, private prison operators and so on.

Investors are already shifting their assets in order to protect their portfolios and bet on volatility, usually according to the CBOE VIX which measures market variations. The concern surrounding the markets has also led to shifts in sectors that investors believe would benefit from the Democrats or Republicans’ control of Congress and the White House.

Wall Street typically uses sectors and other assets that would be affected by different policies to build broad electoral baskets of stocks associated with each political party. Analysts then evaluate the performance of those baskets over time to predict who will win the election.

Currently, Democratic candidate Joe Biden is predicted to win by 60%, while President Trump only has a 40% chance at re-election.

These are actually better odds than what other forecasters have given Trump, which can be explained by the fact that Wall Street often struggles to predict both political outcomes and their impact on asset prices. For instance, equity futures fell on election night in 2016. Investors worried that Donald Trump's victory would hurt corporate profits due to his unpredictable policies and advocacy for international trade barriers. However, equities quickly overcame these concerns as investors revelled in the prospect of tax cuts.

However, longer-term projects such as bets on infrastructure spending and rising bond yields have reversed in recent years.

Both candidates have very different stances on tax policies. Many investors are getting ready for increases in corporate tax. President Trump had decreases taxes quite significantly during his term, which the market was grateful for. However, Joe Biden plans to raise corporate tax rates from 21% to 28%. He also plans to partially overturn the 2017 Tax Cuts and Jobs Act (TCJA) by increasing US companies’ foreign income tax.

Biden's tax policies are predicted to cut S&P500 earnings by 9%, although increased tax spending and tariff cuts may offset much of the drop. The basket of stocks that had benefited the most from tax cuts were recently found to lag behind those that did not benefit from the law.

Still, some investors expect low interest rates and a return to economic growth to support equities regardless of any change in policies.

Private prison operators are another area of ​​the market where Democratic policies could mean significant change. Trump is notorious for having a tough stance on illegal immigration and deportation. As a result, shares in private prison surged after Trump’s 2016 election.

However, Joe Biden has pledged to put an end to the federal government’s use of such facilities. Shares have therefore fallen by at least 30% in 2020.

Meanwhile, shares of student loan service companies are declining. This is because a Democratic victory could place these companies under tighter regulations. Biden also plans to write off a significant portion of the $1.5 billion federal student debt.

While private prison operators and student loan companies generally don't get much attention from investors, they are still sensitive to policy changes. Fluctuations in these shares may foresee the outcome of this year’s election.

Democratic candidate Joe Biden has presented a $2 billion plan to tackle climate change. It includes investing in energy infrastructures and transitioning to electric vehicles. As a result, the Democratic Basket includes companies such as Sunrun, NextEra Energy and Tesla – all related to renewable energy.

Similarly, Biden has proposed to ban oil and gas production on federal lands and waters.

Since investors are expecting Democrats to move to the White House, iShares Global Clean Energy (ICLN) ETF have risen by about 80% in 2020 while energy producers’ stocks have fallen behind the broader market. The latter can also be explained by the fact that the COVID-19 pandemic has affected oil and gas prices.

Energy appears to be the area in which market expectations regarding elections are likely to be addressed. Both candidates have polar opposite policies in this area, particularly because Trump does not believe in climate change.

In some areas, investors are more divided on how to interpret possible changes in policies. This is particularly the case for healthcare, trade and infrastructure spending.

Investors are also monitoring the activity of healthcare stocks. However, policy changes may have to overcome a few hurdles in Congress, so their prospects remain unclear. For instance, Biden wishes to expand the Affordable Care Act by adding a public option like Medicare, while Trump wishes to overturn it completely.

Healthcare stocks rallied at the start of the year as many viewed Biden’s plan as less disruptive to the industry than the single-payer scheme favoured by Vermont Senator Bernie Sanders and Massachusetts Senator Elizabeth Warren. Still, many are uncertain how Biden's proposals will affect these companies’ profits.

Some are hopeful that greater clarity on trade policy with China would boost the shares of companies such as semiconductor manufacturers Intel Corp. and Micron Technology, both of whom depend on smooth business flows. The Trump administration's trade feud with China caused stock market fluctuations for much of 2018 and 2019 before both countries struck a “phase one” trade deal. Biden said he would also challenge Beijing in several areas but would try to work with US allies on trade issues.

Democrats and Republicans alike have battled for increased spending to fix the country's roads and bridges, but the law has yet to pass. There were hopes of an infrastructure bill in 2016 when Trump was elected. Shares of companies specialised in building materials therefore increased but have since fallen. All hope is not lost, however, as some analysts expect a bill to pass if Biden becomes Presidents and Democrats take control of Congress. These prospects have recently given infrastructure-related stocks a boost.

In any case, there is a lot of uncertainty due to the lack of definition of candidate policies and the vagueness persists in many areas. Traders and investors must be careful not to overreact to baskets and forecasts, as they may miss the bigger picture and make hasty and misguided decisions.

José Mourinho becomes XTB’s official ambassador For the next two years, José Mourinho will be one of the faces representing online brokerage company XTB. If his name sounds familiar, it is because Mourinho is a famous Portuguese football manager who has coached great European teams. He is currently the head of Tottenham Hotspur Football Club.
Is it possible to invest in the stock market without having studied finance? Investing in the stock market has never been so popular. Companies such as Amazon and Tesla perform so well that many believe investing in the stock market is easily profitable. For instance, investing £100 in these companies in 2019 would have yielded a 700% return in 2020. The truth is that investing in the stock market only seems easy in hindsight. It is actually a profession in its own right, and requires knowledge, strategy, money, patience and luck. This is why the wealthy usually delegate the management of their portfolio to professionals.