Bitcoin vs. Libra: What should you invest in ? 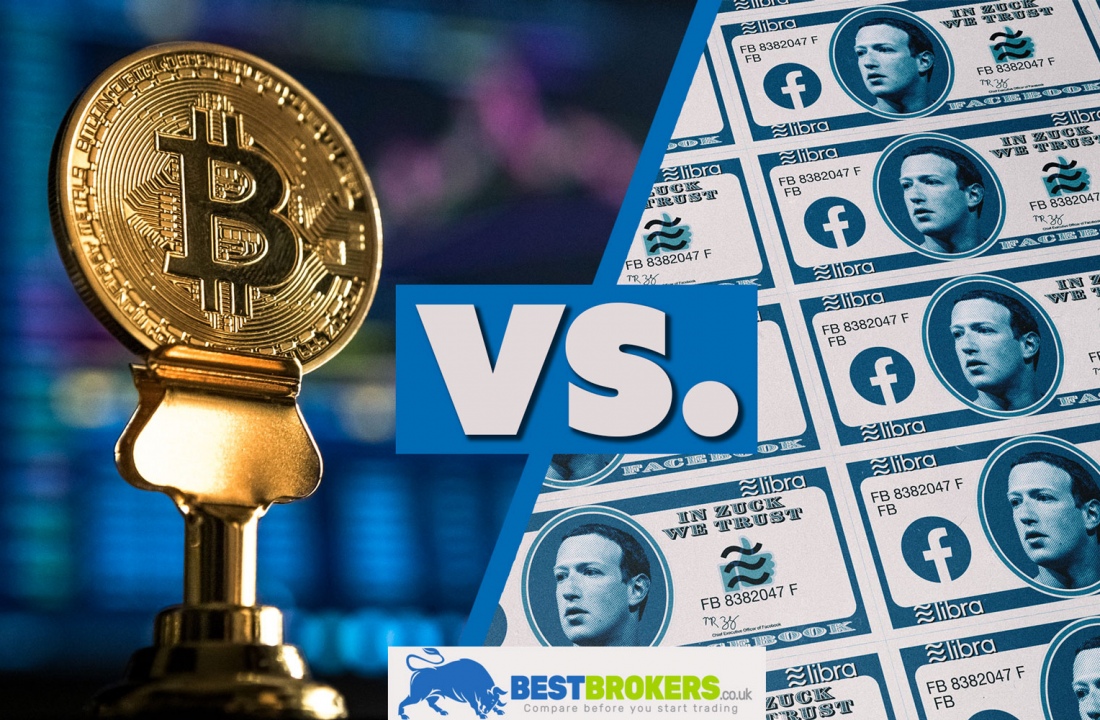 Bitcoin vs. Libra: What should you invest in ?

You’d have to be living off-grid to not have heard: Facebook is launching, along with around thirty other strategic partners, a new digital currency called LIBRA. Or at least, that is the plan. Libra should officially be out in 2020.

It is quite a revolution in the cryptocurrency world. To date, hundreds of projects have made their entry on the market, none of which have had any real vision or substantial technological backing. It was pretty much the Wild West out there, with crypto databases such as www.coincheckup.com listing over 2000 “coins”.

As a result, many observers didn’t give much weight to this market, and to Bitcoin in particular. What exactly is Bitcoin for ? (nothing) Who manages it ? (nobody) How does it work ? (we don’t know) Is the market regulated ? (most definitely not)… Not the most positive outlook on the whole affair, is it?

But the arrival of Facebook, bolstered by the support of the likes of Paypal, ebay, Stripe, Visa, Vodafone and Mastercard, to name but a few, is a game-changer. This is because, first and foremost, it is the first time a crypto project has been thought up by a large well-known company. A second reason is down to the heavy-weight status of the partners in the project. The whole makes for something altogether more serious, trustworthy and legitimate.

So, should we therefore swap our investment capacity from Bitcoin and other cryptocurrencies to Libra ? Or will Libra’s arrival on the market (finally) give credence to Bitcoin ? Bitcoin’s recent bull run may indicate the latter is the more likely.

Indeed, despite this most recent large fluctuation in value, the price of BTCUSD (Bitcoin priced in US dollars) has already increased by 200% in 2019 (climbing $4,000 at the beginning of the year and currently sitting at $12,000, even though high volatility makes it difficult to « set » a price). A 200% rise is simply the best performance of any asset on the market (excluding other cryptocurrencies, some of which will have far exceeded 200%).

Making an informed decision on which to invest in requires knowledge of both products. And Bitcoin and Libra are very different in many aspects.

Bitcoin is entirely decentralized, and no single entity regulates or controls it. It is not linked to a company and it is highly volatile. The intrinsic value of Bitcoin is unknown, since it is not backed by any assets. Basically, Bitcoin is a loose cannon.

Libra presents as diametrically opposite. This digital currency will be managed and developed around blockchain technology by the Libra Association which includes Facebook and other large firms. They will decide what direction to take Libra in, how it will be used, etc. Their vision is to create a genuine transaction tool that can be used around the world and will replace traditional financial services. As regards valuation, Libra will be backed by “reserves”, real assets such as the dollar or the euro, which will give it a far more stable value than other cryptocurrencies.

Is the actual nature of cryptocurrencies in question here?

As far as the above points go, we can say that the buzz around Libra will probably benefit Bitcoin. There is, however, another aspect that differentiates Libra from Bitcoin, a very important one, one that represents the essence of Bitcoin and other cryptocurrencies cryptos : they are wholly and utterly unlinked to any government, company, bank…

The complete opposite of Libra! Libra is managed by Facebook and a group comprising payment behemoths and financial and telecommunications companies. Bitcoin fans must either be laughing their socks off or planning a revolt!

What about the users?

To date the world of digital « coins » has been reserved for a precious few – “in the know”, amateurs with a geek side to them, or speculators. Even though a portion of the wider public will have heard of Bitcoin, they certainly haven’t taken an interest in it. Picture, however, what will happen when Facebook allows pop-ups to appear on the screens of millions of Facebook, Messenger, Whatsapp and Instagram users worldwide, telling them they can now use Libra when they make purchases, sell items or exchange money… Things will be very different!

Overnight, millions and millions of people will be able to access and use Libra. And that is even before the other Libra partners start to distribute this technology via their own communication channels!

From this perspective, Bitcoin has good reason to be worried. Yes, people might eventually consider that Bitcoin was the original, THE digital gold, but will this encourage the wider public to adopt it? Many believe Bitcoin will remain a tool for investment only.

So, which should you go for ?

Until Libra officially goes live, it is still possible to invest in Bitcoin. As we have seen, its value can fluctuate massively, meaning there are probably still some fantastic opportunities to buy and sell BTC. And the price can skyrocket over a very short period of time. There is no reason why we won’t see Bitcoin hit $20,000 again, or even break through, in which case, there would definitely be money to be made.

And whenever it becomes possible to invest in Libra, do it! A word of warning, however. The launch of Libra will probably follow the same course as other ICOs (Initial Coin Offering) – the high number of investors at the beginning is likely to inflate the price…and it may deflate just as quickly!

The investment dilemma over Libra or Bitcoin is more a question of trust in the future of blockchain technology and digital currencies. If you believe in them, you should invest. And if you don’t, you shouldn’t !

Why are investors rushing into gold? The price of gold recently jumped to a 6-year high. According to experts, there are several reasons for the surge, including the likelihood of lower interest rates, a slowing global economy and heightened geopolitical tensions.
Trading: the 10 beginner’s mistakes you need to avoid! Just like any activity, getting the hang of trading takes time. Trading blind, with no knowledge, can make a nasty dent in your savings.